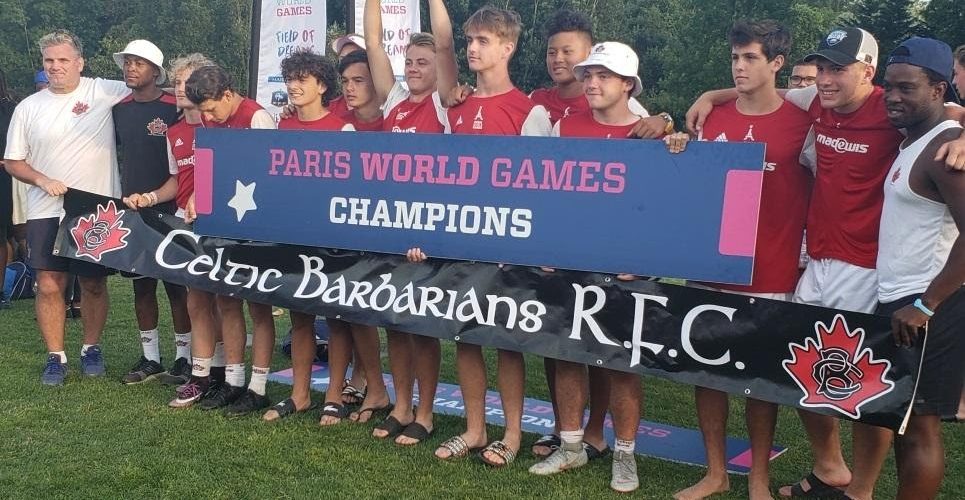 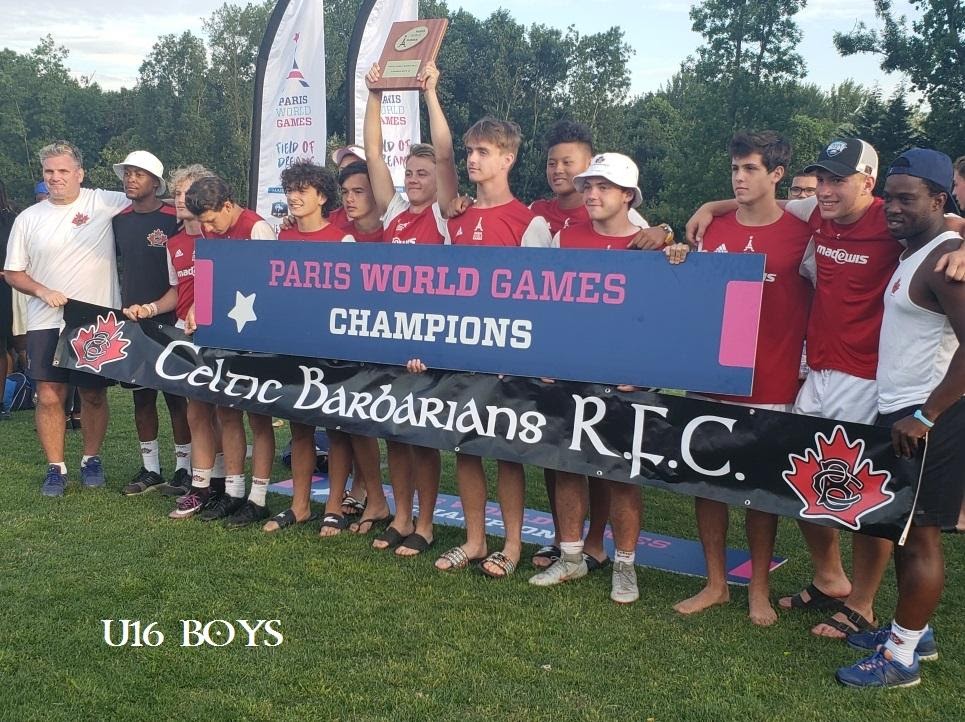 After just missing the podium in their inaugural 2018 visit to the games, the Celtic Barbarians returned with 3 powerful rosters comprised of North America’s best youth 7s talent. Players and coaches converged from 5 countries to assemble select teams in the U15 Girls, U16 Boys, and U18 Girls Elite. Director and U15 Girls Head Coach Cam Wilton was pleased to return to Paris but this time around, had arranged to stay and train in the beautiful French National Rugby facility in Marcoussis where the tourney was hosted. “We had some very difficult hurdles thrown in front of us right out of the gate and the benefit of staying on site was invaluable”. As with all Celtic Barbarians tours, the staff had only a few days to assess their players and figure out where the pieces fit. 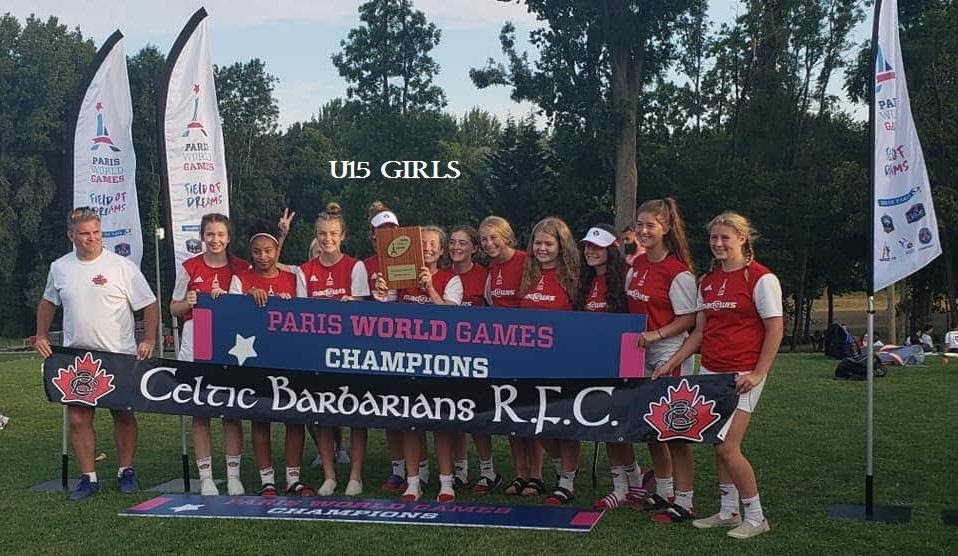 The CB U15 Girls were more skilled than all their opposition but had to stay alert as the tourney organizers agreed to play local laws for the French teams. “A smaller field of play and no lineout boosting made us alter our game-plan on the fly. Our team was built for speed and the unexpected field size definitely neutralized our weapons that needed the space”, said Wilton. The playoff round took its toll on the Sale Academy and they needed to bring in two of their U14 Boys players to keep a full side on the pitch. “At first our girls didn’t want to play against a couple of boys, but they quickly got back to business and never looked back.” This was the first time a U15 Girls team had traveled overseas with the Barbs. Strathcona Druids (Alberta, Canada) star Kayleigh Noel was nervous about the prospect of getting players from all over North America on the same page while jet-lagged and dealing with the heat and humidity. “Playing in the Paris World Games was a once- in-a-lifetime opportunity for me. Despite most of our players meeting at the airport for the first time, we gelled instantly and became an insanely strong team. First place was always our focus and it was so fun playing with top athletes from all over North America. This Celtic Barbarians experience has not only has allowed me to travel the world playing elite rugby, but it has also created life-long bonds with some of my best friends to this day. I am so grateful for the opportunities the CBs club has given to me. “
A very powerful U16 Boys team provided internal competition from their first session. The lads cruised through the round robin stages and gathered confidence by the hour. The lads were in full control right until the last half of the final. The home referee tested their mettle by hammering the Barbs with three yellow cards in 6 minutes. It was all the Barbs could do to hold on for a tie with a missed conversion at full time. Despite a French plea for the tie-breaker to be yellow cards, the Celtic Barbarians were eventually awarded their rightful place on the podium as Champions and the class of the tourney. Captain and future Rugby Canada hopeful Tom Morrissey did not disappoint after a stellar year at Shawnigan Lake School. “Having the honour of captaining the side, it was excellent to see every player’s skills and knowledge improved drastically thanks to our two amazing coaches. In addition, the team also improved off the pitch. In a short time frame, bonds were formed that not only aided the moral, but had a crucial role in the outcome of the tournament. Finishing the tournament with gold medals around our necks was the perfect ending for the team and capped off an amazing experience for the entire squad.”
Many new players earned their stripes on a talented U18 Girls squad as they faced some quality international talent. Veteran Barbs girls led the charge with National team player Maggie Banks and University of Victoria star Nicola Smith at the helm. South African coach Siphathisene Dube
(Sip) was impressed with the girls having a lead at half-time vs the Irish National Team and thinks a healthy lineup could have taken the title. “As a coach it was a great experience to have coached athletes that were goal driven and always will to learn.” said Coach Sip.
The U18 North American girls have been invited to the prestigious World High School 7s Championship in New Zealand in December while the North American Boys U19s will look to win the Emirates Dubai 7s for the first time. 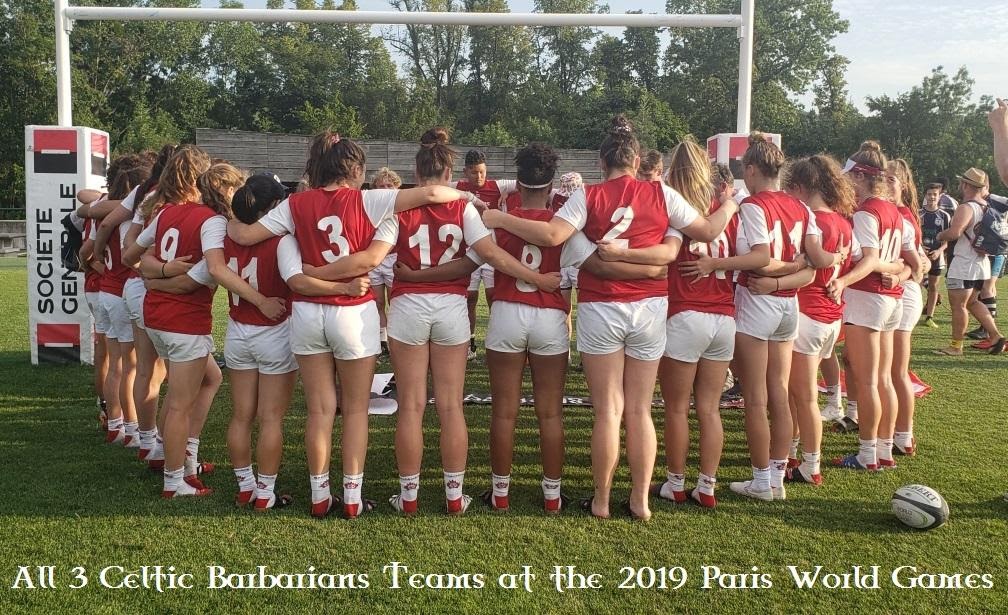