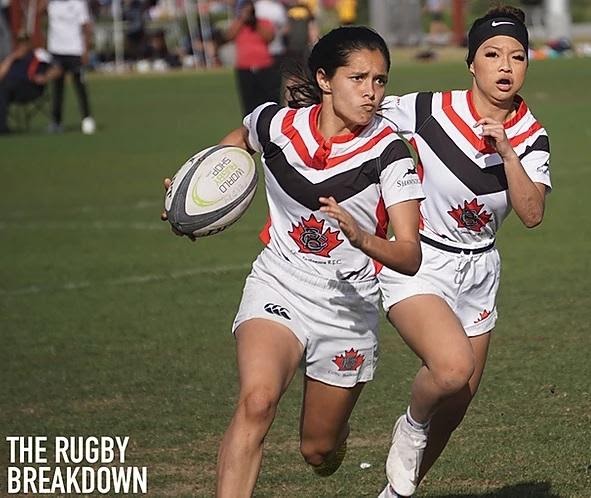 Tournaments like the Los Angeles Invitational (LAI) 7s bring so much talent to one location, that it can be difficult to digest it all. Game day requires a lot of trekking between pitches, and even so, there are always new faces who necessitate a pause on the sideline: WHO is that!? Plenty of high schoolers ticked that box today – from Belmont Shore’s Tafuna sisters, to TOA flyhalf Bailey Woolf, and many more – but no one mesmerized the crowd quite like Vivian Aragon.

Tournaments like the Los Angeles Invitational (LAI) 7s bring so much talent to one location, that it can be difficult to digest it all. There is a lot of trekking from pitch to pitch, and even so, there are always new faces who require a pause on the sideline: WHO is that!? Plenty of high schoolers ticked that box – from Belmont Shore’s Tafuna sisters, to TOA flyhalf Bailey Woolf – but no one mesmerized quite like Vivian Aragon.

The 18-year-old is slight, and so the first place a passerby might see Aragon is in the open field, pulling away from pursuers en route to a try. She cuts with the best of them and is supremely calm and sure when manipulating a staggered defense. On multiple occasions during round three of the High School Elite bracket – which the Barbarians joined after Rhinos Rugby Academy dropped down to the Open – Aragon tapped through a penalty and took multiple runs in and out of Carson’s defense before scoring.

“I just think two plays ahead,” Aragon said of attacking defenses. “Like if I run this way, then I have this group of girls [committed], and there will be space between A and B – and then I go there. I think football helped me with that, finding the gaps in different lines of defense.”

Growing up in New Hampshire, Aragon first played boys’ all-star baseball, and then when the family moved to Las Vegas, Aragon joined a boys’ tackle football team and played wide receiver, cornerback and running back. She wanted to play rugby once she enrolled at Veterans Tribute Korean Technical Academy as a freshman, but the Las Vegas area didn’t have the numbers for a girls’ team. It wasn’t until junior year that she connected with the Celtic Barbarians, a North American touring select side, and Las Vegas Slots, a senior women’s club that competes in the DII Pacific South.

“The atmosphere is amazing,” Aragon said of playing 15s with women. “And that’s what I love about rugby – whether you’re big, small, fast, slow, everyone has a place where you fit in. They didn’t treat me any different. They’re like my older sisters.

“When I’m working it here [at high school events], it helps me with my speed and being able to find holes and everything like that,” the high school senior contrasted play between to two age groups. “When I’m playing with the women, it’s obviously a more brutal game. It’s tougher and they’re more experienced. But I find that it helps because when you play with the bigger women and you come back to the high school, it’s kind of a good thing. It’s like a break. I love it.”

Aragon has perfect tackling technique – perhaps related to her football background, or a necessity that evolved out of facing senior club women, or maybe it’s something she would have done naturally. She hits low, hard and with great speed off the line and into contact. Tackling precision was one of the Celtic Barbarians’ work-ons moving onto the knockouts tomorrow.

“On our offensive line, we were really flat so we need to work on getting steeper,” Aragon assessed. “And then spreading on defense and working on our low tackles instead of trying to wrap them really high.”

Aragon also handles restarts and conversions, and has a natural swipe at the ball.
Upon conversing with the college scouts in Los Angeles, Aragon is not an unknown entity. She’s featured at the Tropical 7s (“I actually played Atlantis in the final when they beat us in the very end and got that last try.”), LVI 7s and NAI 7s tournaments. Aragon has enlisted in the Marine Corps but she wants to play college rugby and study law.

“Lindenwood was definitely my first choice,” Aragon said of current list-toppers. “They’re just an amazing group of girls. When we were down at the Tropical 7s they came and talked to our team and they were super sweet. And Harvard – again, because they’re really good and I have friends who play for them.

“Rugby has my whole heart,” Aragon concluded. “I eventually want to go and play for the USA Women’s Team. That’s my ultimate goal to play nationally and then the Olympics – what athlete wouldn’t want that?”